I didn’t fall asleep right away last night so I slept in a bit and got a later start.  I left Ann Arbor and headed into Detroit towards the Canada border.  The border staff ask a bunch of questions to, of course, try and determine if you have bad intentions.  Being unemployed and not having a specific itinerary raises more questions.  This continued for a bit until I was directed to the side lot for my car to be inspected.

The first inspector asked more questions, including how to open parts of the Tesla and then instructed me to go wait inside the office.  I left the laptop, cell phone and my passport in the car and walked into the office.  I tried to use the restroom but the door requires you to be buzzed in.  I asked for that, and then didn’t make it to the door before the staff member stopped holding the buzzer, so back to her again.  I didn’t think it would be wise to run inside the building.  She teased me about it and then told me to run while she buzzed it again.

I sat in the waiting area for a while and then hear some of the staff discussing Tesla cars and chargers.  I figure that means they’re looking at my car.  I get asked more questions about what I’m doing, where I’m going, where I work, what kind of work I do, etc.  Then I’m asked for the PIN to unlock my phone.  I provide it and go back to waiting.

After a time, I’m called up.  The woman is polite and asks me several of the same questions again.  She asks why I’m on the trip and not working.  I explain I had saved money for something that didn’t work out and decided to take some time off to travel and see things.  She asks what didn’t work out.  I gave a short reply and mentioned it was a long story.  She says, “I’ve got time”.  Really?  ok…. So, I indicated I would tell her the story and then she stops me and says I’m done and go on my way.  The entire thing was only about 30 minutes.

I left without looking through the Tesla other to verify the laptop and passport were there.  The woman inside had handed my phone back to me.  I get to the next SuperCharger and plug in.  This is when I started looking through the Tesla.  The inspection team had been thorough, everything was shifted around.  I set things in place and then went into Tim Horton’s to get some food.  My phone was powered off before I crossed the border to avoid roaming charges in Canada.  Border staff had turned it on and I had messages from Verizon informing me what roaming would cost and asking if I wanted to enable data.  I declined and switched to Airline mode and then connected to Tim Horton’s wifi.

It was about this time that I recalled the text I had sent to Jeff and Daisy when I entered Ohio yesterday and Jeff’s reply.  Nice.  So, I deleted those texts.

I continued on my way towards Niagara Falls.  During the drive, I took some pictures of the trees and some Canadian road signs. 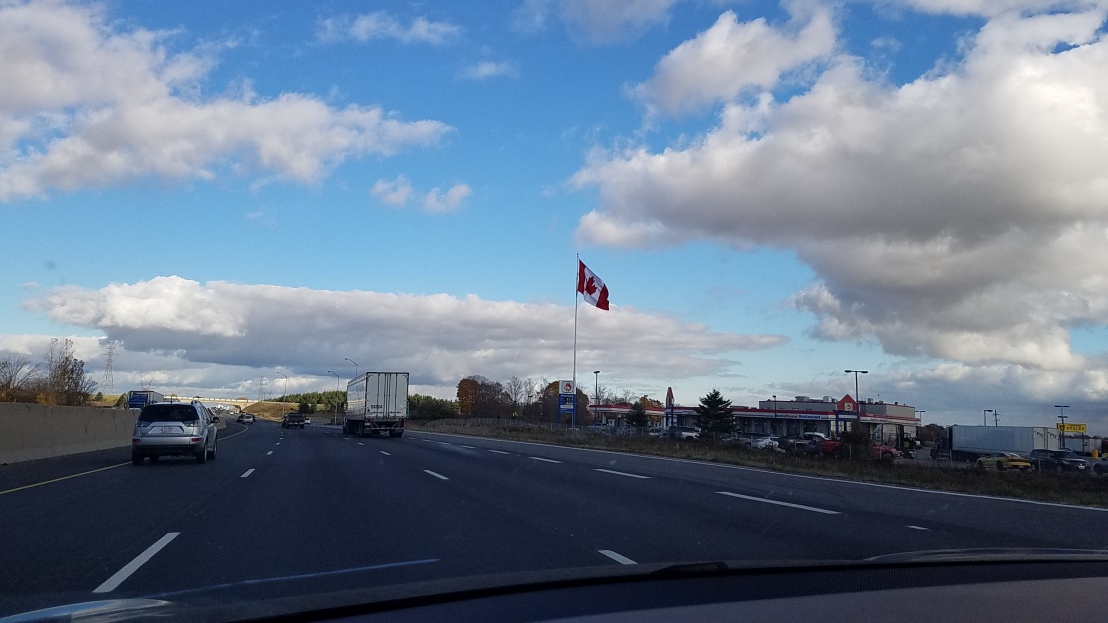 The SuperCharger in Grimsby, Ontario was just across the street from the shore line of Lake Ontario.  I took some pictures with the lake slightly visible in the distance and part of the skyline of Toronto just barely visible over the lake.  This is the best picture of the bunch

Next to the SuperCharger is the Casablanca Winery Inn.  I stepped in for dinner at Bogey’s Grill House set inside the hotel.

After dinner, I finished the trip to the Canadian side of Niagara Falls.  I arrived at night, so the falls were lit with colored lights.  I thought I took more pictures and videos than I found tonight.  Here is the clearest picture 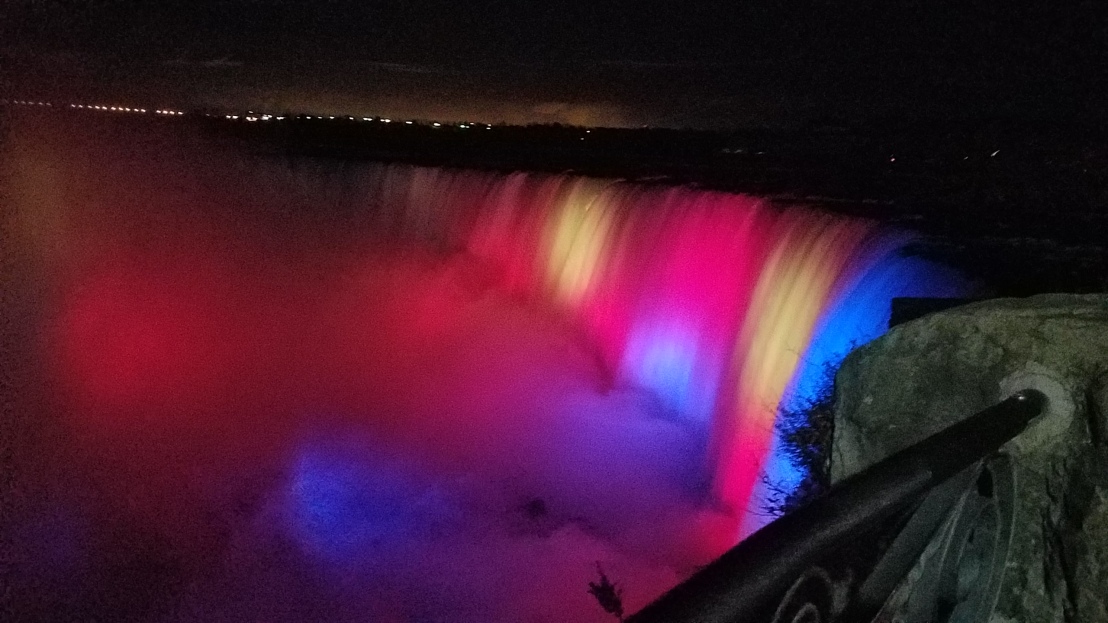 The picture does not give perspective of being there and how large the falls are.

I returned to the car and started the drive back to the USA, crossing into Buffalo, New York.  The line going into the USA was quite long and it was over 30 minutes from seeing the border gate until I got up to the window.  I had another conversation but was permitted to stay in my car without a detailed inspection this time.  I was asked why I was going to Buffalo.  I said there is a SuperCharger there for my car.  The response was, “So, you drove from Phoenix to Buffalo just to charge your car?”  🙂  It seems the border staff on both sides prefer you have a specific itinerary.

At the SuperCharger, I took a look for hotel deals again and found a good price for a room at Salvatore’s Garden Place Hotel.  It was listed as a 3 star hotel.  I’d say it’s more like a 3.5 star hotel.  It’s a classy place with some nice upgrades and touches.  There are 24-7 coffee and hot chocolate machines on a table down the hall.  The bathroom has been updated, as well as the sink fixture.  Real glasses for drinking water and a Keurig machine are in the room.  I’m getting a better appreciation for good hotels on this trip.  So far, I like this one.  The lobby is very nice with a huge chandelier and staff wearing suits.

I don’t have a route planned at this point.  I’m thinking I’ll explore New England going up along the Western / Northern side of states and then travel South along the Atlantic coast.

Some comments have been left on the blog posts.  I don’t know why they are not displaying with the blogs.  I’ll look again for a setting to display comments.  I do enjoy seeing people comment on the blog posts so please don’t hold back if you have a comment.